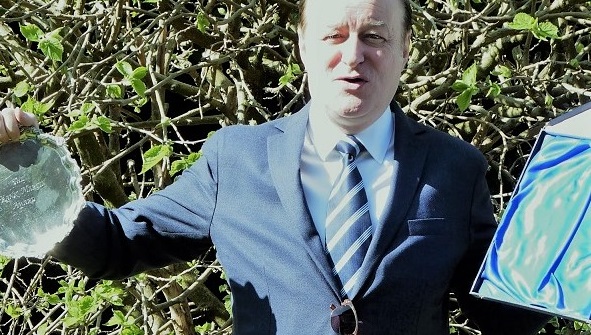 The Award goes to a prominent member of the ABI who is considered to have served the Association or the Private Investigator profession above and beyond the call of duty.

Kevin J Regan was voted in as the 2019 recepient at the Association of British Investigators Annual General Meeting and Black Tie Celebration at: Chateau Rhianfa, Isle of Anglesey, North Wales on Saturday, 11th May 2019.

The award nomination was from the previous winner: Mr John McNulty of Nottingham Investigations. It read:

He has only missed two or three Branch meetings since his interview in 2011 and has occupied every position at the Northern branch since then. As the Chair he organised meetings at venues in Manchester and at Wetherby for the past two years. The latest meeting was a resounding success – well attended with excellent speakers.

As a founding member of the Association of British Investigators Academy in 2014 he served the academy by running Process Serving master classes and offering the IQ Level 3 Award for Processional Investigators, indeed, over 100 ABI members have achieved this Award from Kevin’s training company, to date.

Kevin proofread The ABI Process Servers’ Guide by Nicci Ashby. He proofread and contributed to Alan Blaney’s / Focus Training (UK) Ltd training material which was adopted by the Academy / Association and available to learners until 2016.